A Voice Undefeated, by Collin Raye.

Hello everyone. Thank you for following along on my social media and this blog. Thank you, especially, for being part of the What I’m Reading series.

Your response to the books and the comments on these posts has been incredible. I appreciate your engagement and hope you’ll continue to find value in the books I’m reading. Perhaps they’ll impact your life the same way they’ve impacted mine.

For this installment, I want to share with you a book by my friend Collin Raye. It’s called A Voice Undefeated. It’s an inspirational biography of him and his life and the struggles and ups and downs that he’s had.

It also delves into his music career that includes an eye-popping 24 top-10 hits, 16 No. 1 hits, and millions of records sold. Did you know Collin’s a 10-time Vocalist of the Year nominee?

I enjoy learning from people’s experiences and I think we can learn a lot from each other in sharing our experiences.

In my book All the Right Reasons, one of the principles talks about nothing is more important than relationships — The Dorothy Principle. And I think you’ll get that same feeling as you read Collin’s book.

For me, I’m usually reading three different types of books.

I highly recommend it. A Voice Undefeated. I think you’ll enjoy it. He’s been a friend of USANA for more than a decade. He and Dr. Wentz are close. Collin’s been to Sanoviv. He enjoys our products and is an advocate of really trying to help us create the healthiest family on earth.

I think this read will help you as you move along in your journey in life.

If you watched The Dr. Oz Show episode in which I talked about All the Right Reasons, you heard me tell the story of Dorothy, the namesake for The Dorothy Principle. 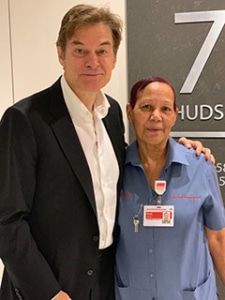 Her story taught me the very important principle: Nothing is more important than relationships.

When I shared that story with Dr. Mehmet Oz, he immediately thought of Pearl, a woman he’s worked with most of his career.

Recently, Dr. Oz shared this story with me and he provided me with Pearl’s permission to share it with all of you.

Meet Pearl – the housekeeper of the cardiac floor at NewYork-Presbyterian Hospital. I’ve known Pearl for most of my career in medicine. Without Pearl, rooms wouldn’t be cleaned in time to house recovering patients who need to leave the ICU. Pearl creates a pristine environment that reduces infection and gives confidence to patients and their families.”

Pearl is a wonderful example of The Dorothy Principle.

“Pay attention to the Pearls in your life. Get engaged with others and your challenges will take care of themselves. Judge us by how we treat those around us.”

I invite each of you to live The Dorothy Principle and continue to develop and nurture relationships.

I recently returned from Washington D.C. Members of the USANA management team and I presented to congressional leaders about key issues involving direct sales. It’s an honor to better educate our representatives about USANA and our worldwide team of hard-working Associates.

I also recorded a video in which I talk about some of USANA’s recent events and accolades.

The Executive Diamond Summit took place in London. It was a great time. We got to go up in the London Bridge Tower and walk out over the London Bridge, where we had a reception. We went to Kensington Palace and just had a great experience. 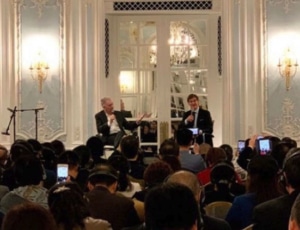 Most importantly, though, we got to interact with some of our top leaders from around the world. Dr. Oz even joined us briefly.

Before we left, I checked off a lifetime bucket list item. You know music is an important part of my life — and the Beatles are one of my all-time favorite bands. Well, I got to go to Abbey Road Studios.

Abbey Road Studios isn’t open to the public and you can’t just go in there. But the company that helped us arrange the Executive Diamond Summit helped us get in to Abbey Road. So I got into Studio 1 where the Beatles did their first live broadcast. All the soundtracks to Star Wars were recorded there. The score for Black Panther (which just won an Oscar) was recorded there.

But for me just to be in those hallowed halls and in those rooms and in the studio was the experience of a lifetime. Many of the songs I grew up listening to and many that have inspired me were recorded right there. And I got to experience it firsthand.

Every year the Direct Selling Association holds “Companies in Focus” events. Direct selling companies open their doors to other direct sellers. The goal is to share best practices so that the industry as a whole can raise its practices to even a higher level.

At USANA we’re happy to welcome in and open our doors to some of the direct sellers in the marketplace. It was fun to have them here and have us be able to share with them what we’re doing that helps USANA be a great company.

For instance, we shared with them from a regulatory perspective how we handle product claims. We want our industry as a whole to make correct and proper product claims — and income claims.

We also showed best practices as it relates to how we treat our employees and why USANA’s been named one of the best places to work in all of America for several years. By mere coincidence, Dr. Oz was in the building shooting a video. So we brought him in and introduced him to the other direct sellers, which was a fun moment.

We also recorded a few other videos with Dr. Oz. Stay tuned…

All around, it proved to be a great experience. I like being part of the direct selling community and showcasing USANA as a company that operates with integrity. 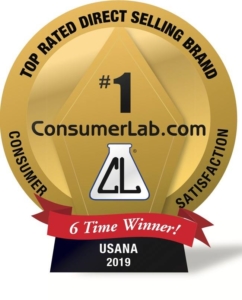 One accolade we received really means a lot to me. ConsumerLab.com is an independent lab that does testing on products and they validate the quality of products. They validate label claims and other things like that. For the sixth year, USANA was named the ConsumerLab.com 2019 Top Rated Direct Selling Brand.

I firmly believe we are in the relationship business. This award signifies USANA’s commitment to customer satisfaction, an area in which we work hard to excel.

What an honor it is, especially to have independent consumer groups that are recognizing our quality and our commitment to excellence. That’s one of our core values. You can’t get better than third-party substantiation. Through Consumer Labs we received that.