In life, we may be presented with opportunities that intimidate or scare us. Often, the fear stems from the unknown or an unfamiliarity. The Turn Up the Volume Principle, which is Principle No. 3 in my book All the Right Reasons, addresses this.

Prepare, and then Go, Baby, Go!

I’m reminded of a golf tournament I helped organize as a college student. Though I hadn’t any experience organizing such an event, I knew it would be a good experience, so I accepted the challenge.

I’m so glad I took the leap! It provided me with invaluable experience. And the opportunity to connect with many individuals who would help me in business for years to come (notably, Dr. Myron Wentz, the founder of USANA Health Sciences).

Turn Up the Volume!

Another illustration of the principle involved a show I produced many years ago called Turn Up the Volume! I worked as a producer and frequently filmed the segments. As I discuss in my book, the concept involved going behind the scenes with famous rock musicians. 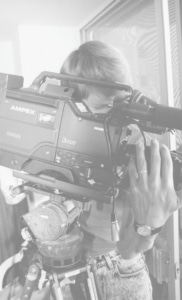 The series catered to die-hard fans who wanted to know everything about a rock star’s life.

Those were the stories I wanted to hear, the ones I knew other fans would also be interested in.

Well, I developed a business plan and pitched the idea. We got the green light to begin production. One night, I got a call that we had an interview set up with Gene Simmons of KISS…in two days. Equal parts of excitement and fear enveloped me. I couldn’t believe I’d be interviewing a legend. Yet, I didn’t have the appropriate camera equipment ($80,000 at the time) to film the interview.

Long story short, I rented a camera, spent a long night learning how to use it, and filmed the interview the next morning. It proved to be a success.

These notions of “fake it ’till you make it” and then “go, baby, go!” are courtesy of my grandfather. The words were written on a plaque in his office. Of course, you need to be careful with the “fake it” part. Preparation is key, and putting in the effort is critical. So when opportunities come, you’re ready to seize them.

My grandfather believed if he were prepared and took action, good things would come to him. I have consistently found this to be true. When in doubt, act.

I invite you to subscribe here to receive monthly emails from me on a range of topics. Please consider contributing to the USANA Foundation. Its mission is to ensure that impoverished children and families reach their fullest potential by providing food and nutrition.